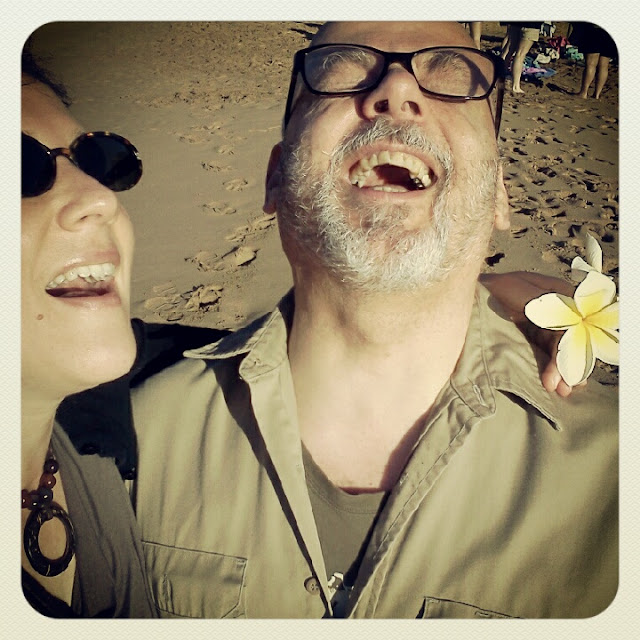 Everyone knows Coco loves the arms-length self-portrait, of herself or of the two of us. It usually takes a few tries for her to successfully complete a shot, since she's essentially shooting blind; when I'm involved, it can last longer, since I often fail to display an appropriate countenance. This particular shot catches me in mid belly laugh, because as she was directing the scene and coaching me to an acceptable expression, Coco told me "Pretend you're relaxed."

I thought that was hilarious; it sounded like such an wifely thing to say, good-intentioned advice from someone who knows you well, including all your limitations. It's funny, too, because ataraxia is a constant goal for me; I value a relaxed and unstressed state of mind, and I think I generally respond pretty well to stressors without getting too wound up. Maybe I've been fooling myself.

Lunchtime found us at Lulu's in Lahaina; we dropped in because a website said that it was vegetarian-friendly. It was a sports-bar kind of place, but we had outdoor seating, a pleasant server, and good beer, and the kitchen was indeed veggie-cool. Behold:

That is a customized version of the loco moko - rice, an awesome mushroom gravy, Maui sweet onions, and fried eggs, but with a tofu steak instead of the usual hamburger patty. It was excellent, and I named it the Loco Mofo. Heh.

Near to Lulu's, in the Cannery Mall, we found this place: 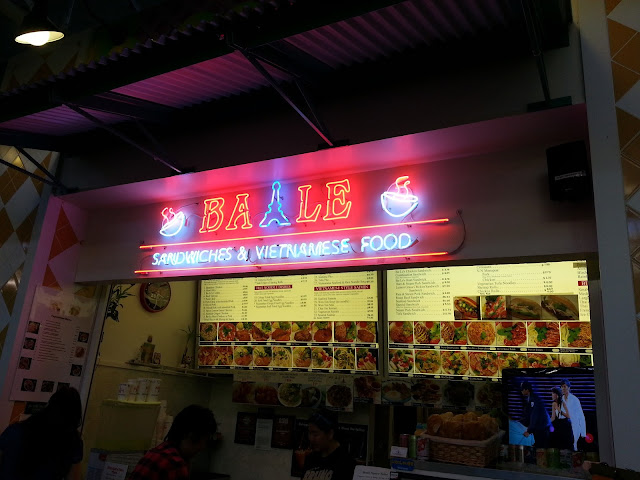 Now, one of our favorite places to eat in Seattle is the Ballet Vietnamese restaurant on Cap Hill. We had often wondered, but never asked, about its name; I think I had presumed some sort of vague French influence. Seeing this place - Ba Le - made me wonder about that theory. Tonight I checked with Google Translate, and in Vietnamese ba is three and lê is pear. Three Pears sounds like a very restauranty name; I think this bears further research and investigation.

Or I could just pretend to relax.

PS: We had Ba Le for dinner and it was good.